Another grand day in the not-so-frozen tundra. We had a record number of entrants for our 17th bi-annual tournament, 33. 16 of the 33 are from out-of-state, representing 10 different states. 8 are “first-time” entrants.

Garth Andersen and his 1908 Cubs and Jerry Jacobs and his 2019 Dodgers would meet for the coveted TCABT-XVII traveling April trophy, in our best-of-three championship series. How we got there …

Garth Andersen found a team that had never been entered in TCABT tourney play, proceeded to roll this team to an overall 14-1 record, claiming his first TCABT Championship in commanding fashion. Hats off to Garth Andersen and his accomplishment, including the best record ever by a tourney team in a single tournament. With the 1908 Chicago Cubs now retired from TCABT competition, they will sport a nifty .933 winning pct. for TCABT eternity. Our tournament has seen a total of 2045 games rolled. The 3 straight shut-outs by his 1908 Cubs during bracket play were not only improbable, but had never occurred previously in TCABT play, including both division play, or bracket play. In fact, it was not just 27 consecutive scoreless innings. When all told, it was also 8 innings from the previous game before the shut-out streak started, plus the 9 innings in each of the first 2 shut-outs, and another 10 innings in the 3rd consecutive shut-out, followed by another 6 innings in the following game when the streak ended. That is 42 consecutive scoreless frames his opponents put up offensively.

Jerry Jacobs and his 2019 Dodgers would suffer the 10-inning loss to Garth’s 1908 Cubs in game 1 of their championship series. However, Jerry also saw his 2019 Dodgers out-score his opponents, 91-41 for the entire tourney, as the runner-up team. His +50 run-differential may be a tourney record as well. The 2019 Dodgers out-homered their competition 25-10 during division play, a miraculous 12-1 advantage in homers during bracket play, totaling 37-11 overall, but somehow could not overcome the 1908 Cubs.

Marty Lee, won a dubious prize of sorts. While in last October’s TCABT-XVI tourney, Marty rolled his way to a championship with the 2019 Twins, he found himself in the opposite direction in TCABT-XVII. The worst overall record, 1-7, and a minus 19 run differential. Marty is the proud owner of a new bag of 100 dice (10 different colors) as the prize for the “Coldest Dice” award. This will continue to be a new prize given out to the owner of the worst tourney record at each of our TCABT events. I can attest, Marty was just as happy to win the bag of dice as he was to win the TCABT trophy last October.

Leroy Arnoldi, and his 1971 Pirates, during a loss to Garth’s 1908 Cubs during division play, the ’71 Pirates had 8 hits, consisting of 7 solo-homers and 1 single. The game was lost by 1-run. This was another example of the kind of day it was for Garth and his Cubbies, not just pitching shut-outs, but also winning games while giving up 7 solo-homers.

Dan Skillings, and his 1991 Braves, reported that his lead-off hitter, Otis Nixon, reached base no fewer than 23 times in 8 games played, via either a hit or a walk. He also scored 9 runs and stole 12 bases.

Robert Elley (2018 Dodgers) accomplished maybe one of the rarest feats of all during TCABT-XVII … with the bases empty, he managed to roll 3 consecutive “42” dice rolls with the “39” outcome, meaning his batter just struck-out, 1-strike at-a-time, over 3 dice rolls.

My apologies to others who may have submitted a unique game or stats. I went with what I was able to dig up from my emails. Thanks to everyone who submitted their results, good and bad.

And thanks to everyone who attended, including Gary and Terry Borthwick, who stayed all tourney long to take photos and enjoy conversation. It is each of the persons in attendance who make this tournament a wonderful day.

Image of the week … 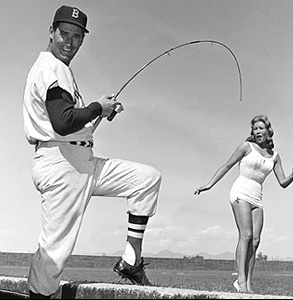 “The one constant through all the years, Ray, has been baseball.” …